Joan of Arc: The Mystic Legacy 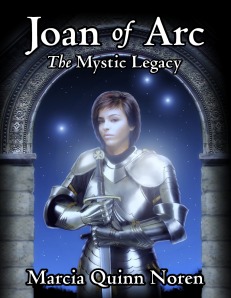 Joan of Arc, The Mystic Legacy provides an intimate portrait of the enigmatic young woman whose heroic life story has provoked ongoing controversy for nearly six hundred years. Fresh insights gleaned from the author’s full decade of research and three field trips to France shed new light on the essential nature of the girl whose faith-based acts of courage altered the outcome of the Hundred Years War.

Examining the external and internal forces that shaped Joan’s well documented life, a discussion of esoteric elements found on nearly each page of the historic records is carefully framed in evidence that has not been plumbed to these depths, until now. Joan’s own words speak with clarity from her trial testimony as the most trustworthy resource for understanding her perceptions, motivations and behavior. The visions and voices she identified as the three spiritual guides who were with her constantly from the age of thirteen until her death are traced into the roots of Judeo Christian antiquity, and her interaction with them is examined through the inclusive lens of contemporary cross-cultural mysticism.

Each stage of Joan’s transformation is traced, from her childhood in the rural marshlands of Lorraine to the halls of power where she claimed her right to command the French army and lead her troops to victory in Orleans and beyond. This unique exploration of Joan of Arc’s mortality and transcendence documents the rise and fall of the military leader whose prophecies were ultimately fulfilled.

Available on Amazon (paper and Kindle)